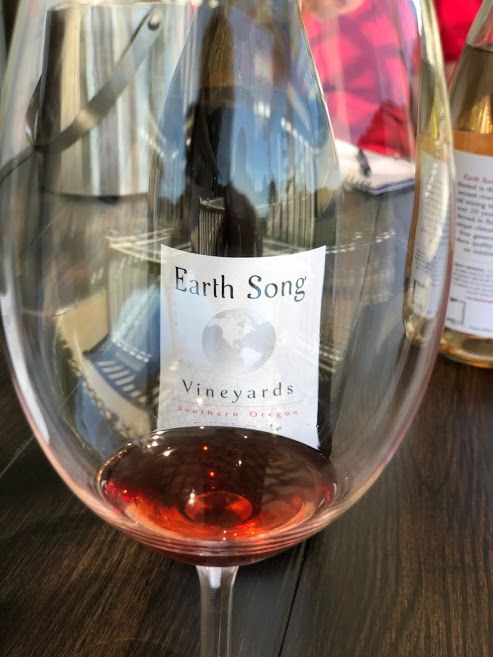 When you follow the GPS directions to Earth Song Vineyards, you can’t help but notice the acres and acres of hemp that line the winding country roads and the unlikely terrain for a vineyard. As we approached the gate, we saw what Courtney, Michael and Courtney’s dad must have seen when they arrived on the property. There were already 10 acres of vines, Pinot Noir and Pinot Gris, planted in the early nineties. There  were several buildings already on the property and, more than anything, an opportunity.

Courtney’s dad was born in Prineville, so he was not a stranger to Oregon. He and his family have traveled and lived all over the country, but clearly, Oregon always had its pull on the family. In 2015 the entire family, four generations, returned to this neglected piece of Oregon and took on the task of making Earth Song a viable, productive vineyard again. From Great Grandma to grandchildren, everyone worked together to recreate this important addition to the the Southern Oregon wine scene. The plan when returning to Oregon was to purchase an orchard. When that fell through. Dad announced that he found a vineyard. He advised his daughter, “you’ll have to learn about wine,” and learn she did!

According to their website, Earth Song Vineyard is planted in the picturesque, meandering river valley of Deer Creek in Selma, Oregon which at one time was known as Dryden. Dryden was established in 1892 when the Chinese and other gold miners built a post office to communicate with better ease. Many of the buildings in this small town were built by using the abandoned river dredge left behind by the miners, including the school house and the community building that is still standing today. The soil that was dredged from the ancient riverbed has been used to help with the growth of our tasty grapes.

There is no tasting room at Earth Song. Courtney welcomes visitors by appointment. We joined her on her deck, just feet from the first row of grapes. We were surrounded by hummingbirds, wind chimes and the sounds and smells of summer. The only unexpected sound was the sound of sprinklers from the nearest hemp field. Courtney explained the challenges that come with so much hemp. Water is the biggest issue. Hemp plants require an enormous amount of water, it sometimes seems to Courtney’s husband Mike that the fields are watered 24 hours a day. That an be a challenge in the dry terrain of Southern Oregon.

And, now, onto the wine. Earth Song produces Pinot Noir and Pinot Gris. The wine is made by well known wine maker Linda Donavan of Pallet Wine Company. This custom crush facility is well known throughout the region for producing award winning wines and Earth Song is among their crown jewels. The 2015 Pinot Noir won 2017 Oregon Wine Awards double gold and bronze in the 2017 Finger Lanes International Wine Competition. The 2016 won gold in the 2018 Harvest Competition. It is darker and more concentrated than many Pinots and presents beautiful notes of dark fruit and earthier notes of vanilla, coffee, tobacco and cedar.

Following our tasting, we took a quick drive to the other side of the property where the wine is stored (and where Mom, Dad and Grandma reside). The land is dry and dusty and yet the vines seem to be happy and settled in. The vineyard is beautifully manicured, showing the loving attention that four generations can give to its family treasure.

Earth Song Wines, along with many other small production wines, can be found in the finest restaurants in Eugene and Portland, thanks to the hard work and creative approach to distribution by BitCork. Visit BitCork to learn where you can try these great artisan wines and ask your favorite restaurants to carry these small production wines. (This blogpost was sponsored by BitCork. )