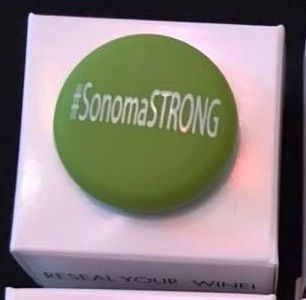 Strong is what we saw when we visited Santa Rosa and its surrounding communities last weekend for the 2017 Wine Bloggers Conference.  The strength of the people, the cities, the communities, the first responders, even the vines were palpable everywhere we looked. It’s easy to talk about the tragedy and trauma people are experiencing, but we would rather talk about the resiliency we heard from people who are living it. It would be appealing to some to see photos of the devastation, we would rather talk about the resiliency of a community.

The community expresses its appreciation

Businesses express their thanks to first responders

Al and Anna Meyers with Neal

One of the highlights of the trip for us was delivering a  car full of running gear to a local running group in Santa Rosa. Our running coach, Joe Henderson, connected us with Al and Anna Meyers, the folks behind Sonoma County Galloway Training. We collected box loads of running gear, t-shirts, water belts, water bottles, shoes and whatever else a runner might need following the destruction of everything, and delivered them to Al and Anna. Again, the gratitude was overwhelming. These folks and their partners continue to support the running community to be sure that this important part of runners’ lives is not another casualty of the fires.

Yes, there were fires. Yes, there was catastrophic destruction. Yes, lives were lost. That cannot be forgotten. But from the ashes, Napa and Sonoma will rise again. It was our honor to be a part of this movement to rebuild, restore and reinforce a community’s commitment to its people and its product.